It’s the final day of this year’s poem-a-day challenge, and as always I feel simultaneously tired and invigorated. Today’s NaPoWriMo.net prompt asked for a poem inspired by a strange fact or historical nugget, while the Poetic Asides final prompt of the month asked for a coming-to-an-end poem. With a little internet exploring of weird facts and Wikipedia pages, I combined the two prompts to make this:

I get it, Frederic Baur

I’m learning
this strange fact ten years after
your death. That you, inventor of
the Pringles potato chip tube, asked
your family to put your ashes in one.
What flavour once lived in there
before you? Was it the bright red one,
iconic, yet housing the ho-hum plain?
Was it the green sour cream and onion,
a peppy shade to brighten up the
evermore? Were you paid well
for your ingenuity, your creativity,
your push to try something new
with the tried and true? Perhaps it’s
warped of me, yes, to think that once
you popped and now you’ve stopped,
but I can tell you this, Mr. Baur, organic
chemist turned food product sage:
I will never again gaze at that cylinder
of salty snacks without thinking of this
outlandish fact, and how  all of us just want
what’s left kept in what remains.

For the penultimate day of National Poetry Month, I used the NaPoWriMo.net prompt to write a response to a Sylvia Plath poem. Mine is not so much a response, as a stream of consciousness something-or-other that came from the line “Where do the black trees go that drink here?” from Plath’s poem “Crossing the Water.” 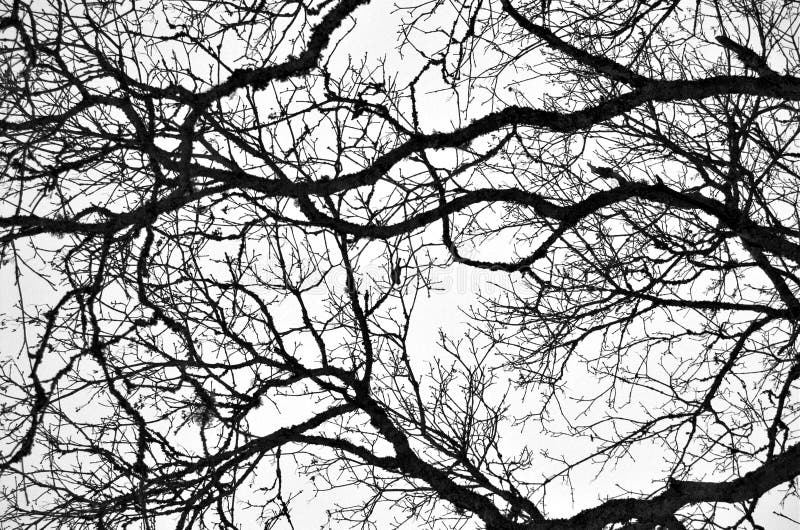 In a gift shop, I tell my friend about my recent obsession with bare branches.

I want to possess them in paintings, necklaces, a metal wall sculpture.
It’s the bud of spring here, and the trees are betraying this admiration.
Abandoning their minimalist life for something with more promise.
The birds, of course, rejoice, but it’s harder to see them in an elm, full plumage.
Harder to watch the small red chest of the robin shrink and puff just before he offers his melodic warble.
I imagine the solitude of a forest, fresh from a fire. Destroyer, perhaps, but purifier too.

It takes years before those charred, naked sticks are overtaken by new growth.

So many years, I could forget how to drink that stark beauty.

I love looking at vintage postcards, so I appreciated the  NaPoWriMo.net prompt for Day 28 asking for a postcard poem. 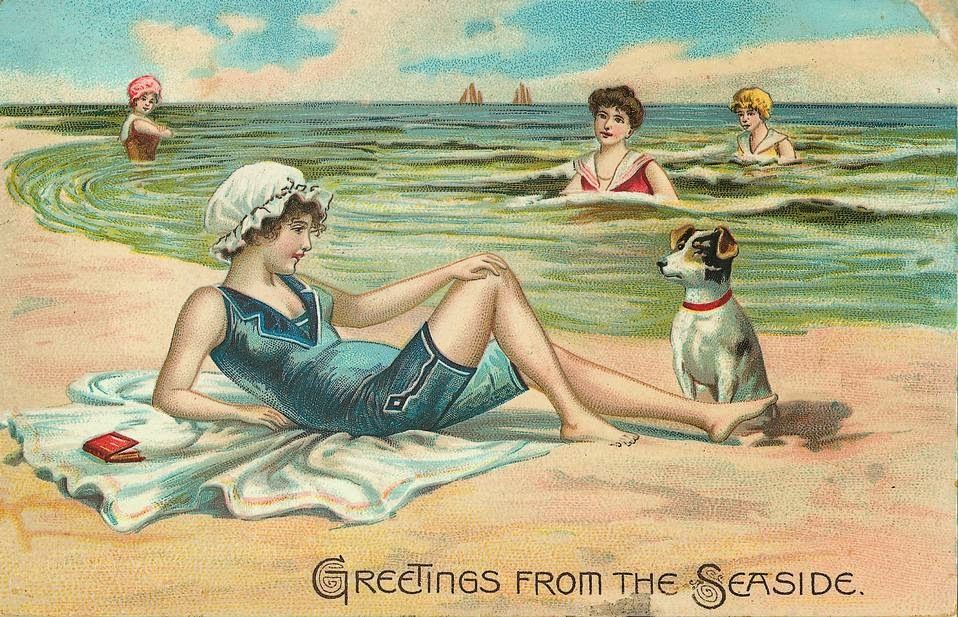 Greetings From The Seaside

There is sunshine and Maggie keeps telling me how warm the sand is beneath her toes. Like heaven, she says, and the stillness of the waves today — the sweet perk of Trixabelle’s ears when she hears children playing up higher on the beach — do suggest a certain beatitude. But there is another feeling here, one more difficult to capture in short words. Something unexpected and heavy, like reaching for an empty shoebox and discovering its filled with lead beads.  Anna  and  Jane say I am being melancholy, spoiling things, since it’s been so long since all of us were together, but perhaps that’s what’s wrong. Time is exposed here, like the husk of a dead crab, caught bobbing  at the edge of the shore. Bouncing, bouncing and never escaping the jostling water. If I could, I would send you that sun bleached shell, instead of this verbose postcard. Then you would understand what kind of woman agrees, even though all she wants is to be hers and hers alone.

I was away for the weekend and fell a little behind on posting for the poem-a-day-challenge, but I was keeping along with a few poem starts in my journal. The NaPoWriMo.net prompt for Day 27 asked for a poem using tarot cards and/or their imagery as inspiration. I happened to be visiting a friend that evening, who read a different sort of divination cards for me, so it was an obvious choice for poetic inspiration.

A card falls out of the deck as I shuffle.

Dean, today my augur, laughs and sets it under a napkin.

It’ll be your fourth he says, grin across his face.

I am never sure I believe in all these mystical tools,

But I am open to the idea, or at least find it fun.

Whether it’s truth from some universal font of knowledge,

or convenient interpretation from a friend-turned-soothsayer

who knows me well, I want to believe him

when he holds up the fourth card, rosy pink,

an outline of a bird

and says, You can achieve your goals if first

you find five joys a day

then sticks in a sharp pin of truth

and if you want to be truly happy

Following the NaPoWriMo.net prompt today to write a poem using the five senses. Was a bit short on time due to traveling, but did get some sense memory inspiration to write this short poem.

Inserting Our Daughters Into Memories Again

Even when they’re not with us, before they even were,

we remember them. Today it was on a plane, the last

time we flew to our once-home. The stench of jet fuel

it might induce our youngest’s asthma. The sweet taste

of cold orange juice on our dry throats — remember how

our oldest called it orandu? The high-pitched shrieks

of a toddler, three rows back, tired and scared  — we held

our girls, too. One on each of our laps. Their soft, warm

like a prayer. And look, out the window. Those plush

clouds below. The sun’s spinning them into gold. Hurry,

take it all in before we blink and forget.

Today’s NaPoWriMo.net prompt asked for a poem that takes the form of a warning label . . . for yourself. I mixed it with the Poetic Asides prompt calling for a poem title using a seldom seen or heard word.

Take it as a warning

the person you are about

in the presence of hateful ignorance.

(Be kind for peace of mind).

Today’s NaPoWriMo.net prompt asked for an elegy, with a tinge of hope. My daughter’s provided the inspiration.

Elegy for a Ladybug

My daughters come in from the yard,
the younger one kneels by the door
her hands cupping something.
The older one digs in a drawer
for paper, scissors, tape and a marker
“What are you doing?” I ask.
“Making something important,” she replies.
They whisper together, then the older one
begins cutting and writing.

“Come here Mom,” they say
and I walk to their crouched figures
expecting a shout of Boo! or a giggle
or to see they’ve been up to something
sneaky but innocent.
Instead, my older daughter says,
“We’re going to say nice things about
this dead ladybug we found outside.”

There, on the floor, a ladybug husk,
its bold red muted to a brownish orange.
She’s taped to a paper, with the words
R.I. P. Ladybug, ? — 2018
scrawled on top in blue.
A plastic case set on top,
keeping her, like Snow White.

“She was pretty, and bright,” my young daughter begins.
“She was good at flying and crawling, and though
we don’t know how long she lived, she probably
had a nice life,” my older daughter says. “Your turn, Mom.”

I find my own mouth empty, at first,
my thoughts too full of gratitude for my girls,
but I meet their sweet and sombre tone,
“We wish we could have known her while she lived.”

My older daughter nods, gently picks up
the paper and the plastic case, sets it
on a cabinet, between a painting she made
and an overgrown spider plant.
“A nice place to rest,” she says.
Nature is safe in these small hands.

The Poetic Asides prompt today called for an “action” poem, while NaPoWriMo.net‘s suggestion was to write a poem based in sound. I decided to do a little mixing.

The ear is a good reader.

She can catch things that the lazy eye

just rolls on by,

the tools of poetry come alive

with the touch of a tongue.

Sounds better out loud, doesn’t it?

voice and verse passed down

Since I’ll never be a rock star

from a brightly lit, stadium stage

Melding prompts again today with Poetic Asides suggestion to take the name of a plant, flower or tree and make it the title of your poem, and the NaPoWriMo.net prompt to pick something impossible from a list of statements, and then write a poem in which the impossible thing happens. The statement I picked was The stars cannot rearrange themselves in the sky. Because it’s Earth Day, I was also thinking about humanity’s  propensity to shoot ourselves in our own earthbound feet.

Some things aren’t supposed to happen.

Stars aren’t supposed to rearrange themselves in the sky.

We’re not supposed to be our own worst enemy.

Under the hood of night

tries the lazy letter I on for size.

swallowing the dark with her

the sphinx moth with her scent.

The NaPoWriMo.net prompt today suggested playing with the myth of Narcissus in some way. Couldn’t stop my brain from going straight to 45.

I’ve got the proof

in my golden mirror.

How great, not again,

whatever I think I am.

And aren’t I amazing?

You’d see it too,

if you had a